According to the Ombudsman Service, this reduction has been caused by the significant reduction in the energy prices during the corona crisis:

“When energy prices do not rise, customers are less often surprised by higher energy invoices when their consumption does not change; this leads to fewer complaints. However, this does not mean that customers should feel comfortable with their energy invoices, because it seems that many customers are still bound by (dormant) extension contracts with prices that may even increase to more than double the prices during the corona crisis,” says Eric Houtman, Dutch-speaking Ombudsman for Energy.

The questions, complaints, and reports received in 2020 were related primarily to:

The other complaints received were related to problems with the quality of customer service (3.8%) and regional authorities (11.7%) such as connections to and disconnections from the grid, power outages, green energy, public service obligations, and the distribution network rates. 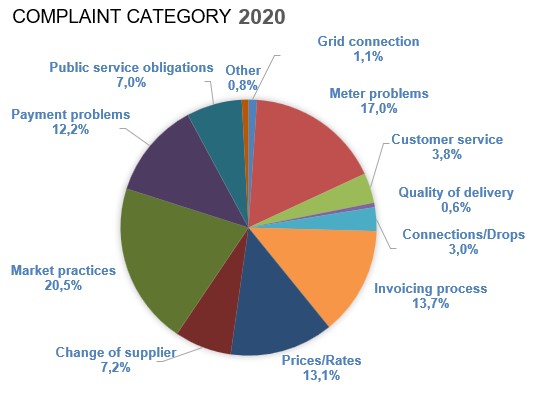 Although most of the complaint categories remain the same, the content of some complaints has indeed changed during the COVID-19 pandemic.

Therefore, the memorandum from the Ombudsman Service to the federal policy-makers remains more topical than ever: https://www.ombudsmanenergie.be/nl/publicaties/advies-19013-van-31-december-2019-memorandum

With these policy recommendations, the Ombudsman Service for Energy wants to improve confidence in the energy market, in particular by proposing several measures in the areas of pricing and (social) rates, the collection and recovery of energy invoices and debts, the commercial practices of suppliers, as well as for strengthening the operations of the Ombudsman Service itself.

More details regarding the disputes and the recommendations per energy company will be announced in the annual report of the Ombudsman Service for Energy which will be submitted to the Federal Minister for Energy and to the Parliament by 1 May 2021 at the latest.

Complaints must be submitted in writing to the Ombudsman Service for Energy:

Today has been declared a National Day of Mourning in #Belgium, following the floods which devastated parts of the country and neighboring regions last week. We mourn the loss of life and thank the emergency responders and other frontline workers and volunteers #DeuilNational

NEON is the European network of independent, not-for-profit consumer dispute-resolution services and ombudsmen active in the energy sector. Our members have the public mandate to provide an easily-accessible and free-of-charge way to solve disputes between consumers and companies.